In America you can buy bucket-sized cups of coffee in any flavour you like other than coffee-flavour.

I was on the hunt for some decent coffee and beans while in Boston and I stumbled upon this article on Boston.com that got me all fired up.

I realise this thread was 4 years old but it still comes up featured on the coffee week page of the Boston newspaper. I’m in the midst of a trip back to the U.S.A. after a couple of years and still struggling to find an acceptable cup o’ joe outside central metro areas (I’m happy to see the best independent coffee houses in Boston article and look forward to checking out some of the winners starting with Blue State Coffee and a haunt I’ve been in the past – Pavement.) Currently I’m listening to a drip machine at the only local roastery where I am (no need to mention names as it’s an iconically sad and repeatable experience) burning and boiling away any remaining flavour in the liquid and replacing it with a bitter burnt pre and after taste I’m about to confirm out of an attempt at respect for my host I’ve travelled to see.

Spend some time out of this country and you realise it’s the brunt of so many bad coffee jokes around the world. Thankfully they eventually drove Starbucks out of my current home in Australia with their over roasted, over sugared concoctions to cover up the mediocrity. Drip coffee in general has got to be the worst insult to coffee beans I’ve ever encountered — and I use to partake of it like it was meant to be. If you can’t at least palate your coffee black but have to immediately preempt that with multiple teaspoons of sugar and milk to make it so (rather than a flavour variance choice), you need to look elsewhere, seriously. Thankfully I finally did 35 years in to my life. Yes, I’m a reformed drip coffee drinker – the worst kind!

Later on in years I discovered the beauty, complexity and nuances of making pourover, chemex, aeropress, espresso: the feel of the grind in congruence with the kind of brew, the differing flavour profiles of these processes, the choice of beans, the affects of water temperature and humidity and so on, did I say the importance of a perfect and fresh grind? most important. Now you may not wish to concern yourself with learning and mastering all these intricacies, but if you haven’t at least experienced coffee by a barista that does, for the love of revealing to your mouth all the layers upon layers of complementary flavour elementals that can come from this glorious bean when properly prepared, then you are doing your mouth a serious disservice. Boot kick your drip machine to the curb (you don’t need to spend a lot of money or time, get a $5 pourover mug top or an amazing $30 Aeropress), avoid these 2 coffee hating chains like the zombie plague they are, and become a coffee lover for the first time in your life no matter what age or level of experience you are.

By the gods of Arabica and Robusta wake up America!

I have a fickle love affair with time. Sometimes I have a burning desire to know the exact time of day. I ‘watch’ any nearby clock with breathless anticipation. Usually coupled by an impending life circumstance I anticipate with joy or dread. At other times, maybe even for an entire day or week if I’m lucky, I’ll loose all sense of it save my inherent biological clock I can’t turn away from. I know I’m not alone in this transgression.

Also like many of us I was introduced to the concept of wearing a wrist-watch at an early age, likely before it was no more relevant to me than learning to understand this partly man-made measurement over the cycles of nature, at a time when my youthful abandon of necessity of this save when my body gave out from hunger or exhaustion. I’m reminded daily of this now as my 3 year old tells me it’s morning time at almost 5pm simply because it’s still light out. “No daddy, it’s morning time now!” 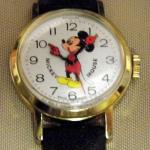 The first watch I can remember possessing was a thing of beauty for an entirely different reason. That of watching Mickey’s hands unhumanly spin around his cartoon body, managing to fix his carefree smile throughout the daily contortions.

The second had to be my initiation into the digital world with a Casio complete with these mind-boggling features of stop-watch, alarm clocks and even a calculator with an impossibly difficult to navigate user interface. Didn’t matter to me, it was so Dick Tracy!

Wearing such devices at that time was equally about pure gadget status factor than the necessity of function. I fondle my grandfathers gold-plated pocket watch from time to time and imagine the same: 1 part time-keeper, 1 part status symbol.

Later in life I waffled between the choice of analog vs. digital timepieces, caught between the representation of time as a daily cycle or the slow LED glow march to the end of time itself. But always, with my piece du jour strapped to my wrist.

Then other devices came along that added time as a functional after-thought as it was back-staged by cooler tech such as pagers and later mobile phones. It was around this stage that the cracks began to appear in many of our relationships with our wristwatches. Why must I suddenly be burdened with 2, 3 devices that provided the time of day…the sexier tech prevaled. I started wearing a wrist watch less and less until about the time of my first Palm pilot it left my wrist altogether.

I became quickly accustomed to the newfound freedom of the naked wrist. Complementary bracelets went by the wayside as well as they ‘threw my symmetry off’. I personally had another motivation as a musician who occasionally played percussion and keyboards and these accoutrements only got in the way, or forgotten if I took them off and left them somewhere.

My new shackle was the flick of the wrist in and out of my pants pocket to quickly avail myself of the time and move on. In retrospect, this lessening of the time being so readily available without this extra friction started to have a fundamental affect on my relationship with time. I became less reliant on this acute information unless absolutely necessary. Of course this relationship differs greatly from person to person or from stages of life and responsibilities. If you’re not punching a time clock, tied to a class schedule or responsible for getting kids to a thousand different places on time or calculating yet another round of antibiotics or pain medicine for this weeks child-care bug, etc etc then this punctuality is perhaps less important to you. Then there’s vacation, especially if you’re camping for a few days or plopped on a beach — time becomes a fluid stream of consciousness.

Despite my embrace of the digital world to a viral level: early adopter of personal computers, smart phones, tablets, reading ebooks for 15 years, here and there my analog brain found ways to fight back:

Until last month, my life was in balance around time issues (not time management, that’s an entirely different if related story!) Finding out the time was still minimally distracting yet quickly available. My phone flicked in and out of my pocket probably more than ever but for entirely unrelated information fiending. 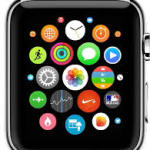 Then the  Watch announcement happened. The concept of the digital watch evolved even far beyond the digital communicator of our Dick Tracy youth. Lust quickly set in, colours and material choices meticulously pondered over. There’s no avoiding now I will likely be waiting in line, possibly overnight at my nearest Apple store. I’m sure I can easily convince my 6 year old to camp out with me (his Santa list was after all recently collated to include:

Dream on son…gawd what have I done!?

The abyss of time in anticipation of this yet to be announced product availability is now filled with pondering how this will change my life —and my ever-shifting relationship with time. I’ve already drenched my thoughts in possible software angles and renewed my interest in learning Swift and WatchKit to try my hand at developing something for an entirely new platform — how exciting!